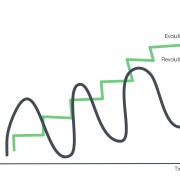 So given that New Year’s resolutions seem to work for less than 4% of the population, why does such an ineffective approach to personal improvement gets so much airplay?

In a past life I worked at as a business improvement coach at Rio Tinto helping implement a methodology known as Lean. Having seen the success of Lean first hand I became a bit of a devotee and still apply many of the tools and ideas to my current work. Although it is probably a little unhelpful to single out just one facet of Lean, I find there is one example of the Lean approach that might help us with making better New Year’s resolutions. That is the Eastern vs Western philosophy of change.* 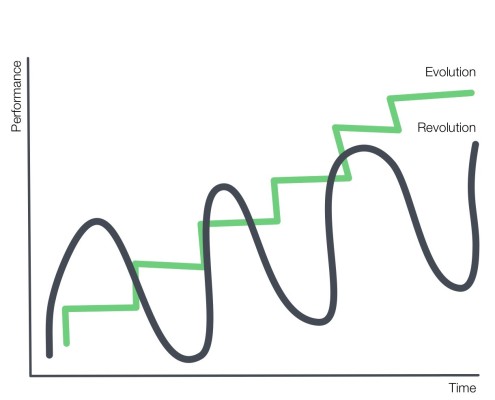 The Western philosophy to change is a revolutionary one. It involves making big changes irregularly (sometimes we like to call this ‘innovation’). These projects sound like exciting, game changing, name making types of projects. The only problem is that these changes are so big and so revolutionary that they can’t possibly stick. Not just the amount of the change to much for most people to take, it is the fact that they occur irregularly means people are generally unprepared and overwhelmed.** The worst part of this is that deep down we know the change won’t stick. We know that we will start sliding back towards the status quo almost as soon as the new changes are in place.

The Eastern approach to change is an evolutionary approach. It involves make lots of little changes all the time rather than big ones every now and then. The poster child for this approach is Toyota and in 1996 alone they completed more than 1.5 million business improvement projects across their manufacturing facilities in Japan…and 60% of these projects cost of less than $3.*** The other benefit of the evolutionary approach is it doesn’t matter if every project is successful. You will learn from your mistakes and there will always be another project.

So in effect, we want to make big, bold New Year’s resolutions because they sound awesome (I’m going to lose 10kg, I’m going to run a marathon…wearing a gorilla suit…backwards) even though deep down we know that we won’t keep them. But if we really wanted to make change that matters we would do small things more frequently.

*I am not entirely sure how accurate it is to call this an Eastern vs Western philosophy. I am sure this is a gross oversimplification especially given that many aspects of Lean were originally sourced from Western organisations.

** This is also why we need to have Change Managers in organisations because without some cajoling most people wouldn’t go along with it.

*** Apologies for the outdated statistics, I tried to find something more recent but Google couldn’t help me.

Curiosity is the antidote to unlimited choice